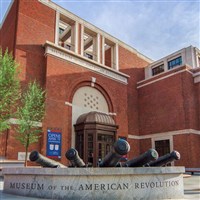 Join Perkiomen as we travel to the heart of Philadelphia, Pennsylvania for a tour of the National Liberty Museum, enjoy lunch at City Tavern, tour the Powel House and also the Museum of the American Revolution.

Enjoy this journey through the remarkable story of America’s founding and gain a deeper understanding of the people, events, and ideals that gave birth to the nation. Our first stop is at the National Liberty Museum where inspiring experiences allow you to interact with incredible stories of heroes. An included lunch at the City Tavern will then be followed by a tour of the Powel House. Samuel Powel was the last mayor of Philadelphia under British rule and the first mayor following independence. He was dubbed the "Patriot Mayor". Many important people have walked those halls...Washington, Jefferson, Franklin, Marquis de Lafayette and John Adams. As we finish our day we will explore the Museum of the American Revolution. From the early stirrings of unrest in Boston to the opening shots of the War of Independence, and from signing of the Declaration of Independence to the creation of the American Republic, the Museum's core exhibition explores the ideas, events, and legacies of America's revolutionary beginnings.

Experience the Museum of the American Revolution