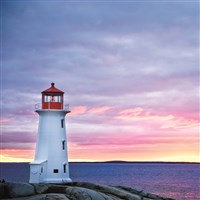 Nature's bounty runs unchecked here. The landscape unfurls along meandering roads. Stretches of rugged coastline harbor history. Discover why this maritime landscape has a tremendous influence on art, literature, and music in your travels on land and sea. Cruise from New Brunswick to Nova Scotia and then on to Prince Edward Island. Visit gardens and historical sites on this vacation to see the beauty of Atlantic Canada.

Our Nova Scotia & Prince Edward Island adventure begins as we travel to South Portland, Maine for an overnight stay.

This morning we will depart for St. John, New Brunswick, for our afternoon ferry crossing to Digby, Nova Scotia. There are a host of fantastic amenities aboard the Digby Ferry including dining and entertainment. Breathe in fresh, salty air from the outdoor seating and viewing area and keep a keen eye on the Bay of Fundy for whales and other marine life. Our lodging for this evening will be at Digby Pines Resort overlooking the Bay of Fundy.

"Ciad Mile Failte!" These are the Gailic words for one hundred thousand welcomes, and we will hear them often during our visit to Nova Scotia! Step foot onto one of the most hotly contested pieces of land on the entire continent which became Canada's first administered National Historic Site in 1917: Fort Anne. The land on which Fort Anne now stands is part of the traditional homeland of the Mi'kmaq. In recent centuries, a succession of Scottish, French, and English settlers clashed over this prize on the banks of Nova Scotia's Annapolis River, often drawing the Mi'kmaq into their conflict. Fort Anne was the site of thirteen attacks, seven change of hands, and the ratification of the Treaty of Boston. Today, you can walk the earthen walls, explore the 1797 Officers' Quarters Museum, and soak up thousands of years of Canadian history. We will make a lunch stop before visiting Grand-Pré National Historic Site. This historic site commemorates the Grand-Pré area as the center of Acadian settlement from 1682 to 1755 and the Deportation of the Acadians, which began in 1755 and continued until 1762. Here we will visit the Acadian Memorial Chapel, the Statue of Evangeline, and the Deportation Cross. We then will travel to Halifax to check-in to The Barrington Hotel, our lodging for the next two nights. Following dinner, we will enjoy The Royal Nova Scotia International Tattoo.

A tour of Halifax will fill our morning. During this tour we will have a chance to visit the Citadel and witness the Changing of the Guard. This afternoon we will enjoy free time at Peggy's Cove. The remainder of the day will be at your leisure.

This morning we will travel eastward to Cape Breton Island. One of the highlights will be the Alexander Graham Bell Museum at Baddeck which houses a remarkable collection of his early inventions. Our lodging for the next two evenings will overlook the beautiful Bras d'Or Lakes.

Today we travel via the Cabot Trail, one of the most scenic highways in North America. Continuing our coastal drive we will have numerous opportunities for pictures as the highway winds through Cape Breton Highlands National Park, past majestic rock bluffs, over the summits of lofty peaks, and through deep streamlined valleys.

We'll go to the Hector Heritage Quay to see the replica Ship Hector and learn about the first Scottish Settlers before taking a short ferry ride to Wood Islands, Prince Edward Island. Dinner this evening will be included at a local restaurant.

Today, a native guide will introduce us to the sights and local history of Prince Edward Island. We will visit the Anne of Green Gables Museum in Kensington before viewing the North Shore beaches and an Acadian fishing village. We will tour the world famous Green Gables at Cavendish Beach and much more. Following dinner we will enjoy the new Canadian musical MAGGIE, which tells the inspirational tale of a fiery school cleaner living in the mining town of Lanarkshire, Scotland. The heartfelt show features a soul-stirring score by award-wining recording artist Johnny Reid, a Scot who immigrated to Canada as a teenager.

Today we will be crossing the Northumberland Strait Bridge, "The World's Greatest Engineering Feat", toward St. John, NB for our overnight lodging. Our highlight today will be Fundy National Park. Here we will view the Rocks, known as nature's flower pots.

This morning we depart New Brunswick and head south to Portland. Lodging this evening will be in South Portland, ME. Dinner will be included at a local restaurant.

A passport is required for ALL travel between the U.S. and Canada.
If you are bringing children on the tour other than your own, customs is requiring that you have a registered letter of approval from their parents.