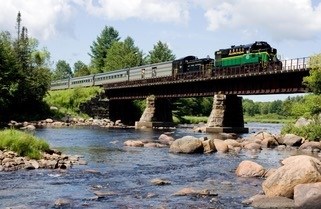 Welcome aboard! It's full steam ahead on the historic trains of New York and a gold-medal-worthy adventure in Lake Placid. Travel back in time as you chug along by small villages and historic homes, past hillside farms and big red barns. Climb new heights in Lake Placid and venture out to exciting sights in New York State. This vacation offers something for everyone. Come along, sit back, relax and enjoy the ride!

With a morning departure from Pennsburg, rest and lunch stops en route, we will arrive in Utica, New York by mid afternoon. For an ideal start to your "Ride the Rails" vacation, we will stop at the Boehlert Transportation Center at Union Station for a guided tour of one of the "Great American Stations." The historic Utica station was opened for the New York Central (NYC) Railroad on May 24, 1914. It became a union station in late 1915 when the Delaware, Lackawanna & Western Railroad and the New York, Ontario & Western Railroad moved their services to the riverside facility. Three stories high, this monumental building includes a rusticated granite first story with buff brick above. The interior is as impressive as the exterior. The main waiting room rises to a coffered, barrel-vaulted ceiling thirty-five feet at its peak and the floor is made of durable terrazzo. Grey Vermont and Knoxville marbles are used on the interior wall facings and ticket windows. After the tour, we will board the coach and travel to our full-service hotel for a single night stay. There will be time to relax and refresh before dinner. We will then gather for an included dinner served in the hotel's casual Moose River Restaurant. This eatery offers an ideal way to unwind and enjoy good food after a busy day of travel.

This morning, after an included breakfast at the hotel, we depart for the Adirondack Scenic Rail station located just minutes from the hotel. We board the 9:30am train and travel to Thendara, where we will arrive around 11:30am. The tracks take us through remote forests, past sparkling rivers, over bridges, past tranquil ponds and streams and into the magnificent beauty of the six million acre Adirondack Park. Become a witness of nature's bounty and watch for the many animals and birds along the way. Upon arrival in Thendara, we board the coach and travel just a short distance to Old Forge, NY. Visit the charming shops and have lunch on your own in one of the local eateries. We depart Old Forge early afternoon and travel deep into the Adirondacks to the Adirondack Experience, the Museum on Blue Mountain Lake. With Blue Mountain rising behind it and Blue Mountain Lake sparkling below, the Adirondack Museum's vast campus features displays in 22 modern exhibition galleries and historic buildings. The exhibitions tell the unique story of the Adirondacks and its people, through outdoor recreation, boats and boating, transportation, the fine arts, work and industry and tourism. We depart the museum late this afternoon and travel to our lodging in Saranac Lake. Surrender yourself to the natural and untouched beauty of the Adirondack Mountains. This evening, we gather for an included dinner.

We start our day with a hearty breakfast served at the hotel. Today's outing gives you an up close and personal experience to witness the challenges of our Olympic athletes. A local guide will meet us at the hotel and join us for an immersion into the Olympics. It is often said that Lake Placid is where "miracles are made." We will visit the Ski Jumping Complex and the site of the Olympic Flame Cauldron. At the Jumping Complex, we will board a double chairlift for a 4-minute ride to the elevator at the ski jump. Then, board the glass elevator for a 2-minute ride to the observation deck. Once at the top of the elevator, the glass-enclosed observation deck offers spectacular, 360-degree views and the breathtaking realization of the steepness of the ski jump! As you depart the Complex, you will witness the Olympic Cauldron located across the street. We return to downtown Lake Placid and arrive at the Olympic Museum. Here, you will explore the legacy of the 1932 and 1980 Lake Placid Winter Games with many great exhibits, which include video highlights, athletes' uniforms and equipment, collections of Olympic Games' torches, mascots and medals including the first gold medal ever awarded. During your visit, watch video of the "Miracle on Ice." After our "Olympic Tour" we will say goodbye to our guide and venture out to have lunch on our own at one of the local eateries. We depart Lake Placid early afternoon and travel south to Ticonderoga, NY. Later this afternoon you will step into history at Fort Ticonderoga, a large 18th-century star fort built by the French at a narrows near the south end of Lake Champlain. Experience the story of how the blood spilled to create an empire in the French and Indian War, resulting in the struggle for America's independence a generation later. Relive the defining moments in America's history when nations fought to control a continent. Venture out to explore the museum, grounds and King's gardens and witness the activities of the day such as the musket demo and fife and drum corps. Your visit includes a 30-minute introduction led by a costumed guide. We then travel to Lake George, NY and our overnight full-service hotel. After you have refreshed, have dinner on your own in the casual on-site restaurant. From lighter fare to hearty entrees, there's a selection certain to please any appetite!

After breakfast in the hotel we will head to the shores of Lake George to board the Minne Ha Ha, an authentic Sternwheel Steamboat, for a tour of Lake George's Southern Basin. Imagine the way people traveled this lake over 100 years ago. Step back in time, as the Calliope, powered by steam from the vessel's boiler, serenades you while you board. Enjoy beautiful views of the Adirondack Mountains and see stately homes along the water's edge. We will then board the coach and travel to Kingston, NY where you will have lunch on your own in one of the local eateries located near the Catskill Mountain Railroad's station. We gather at the station about 2:45pm and prepare to board for our 3:00pm departure aboard this heritage tourist railroad that began operations in 1982. Steam locomotives were the technology that helped build America's railroads. This steam locomotive was built by Baldwin in 1924, for the American Viscose Co. of Roanoke, Virginia. In the 1960s it was sold to Gem City Iron & Metal in Pulaski, Virginia. Scott Symans of Dunkirk, NY, purchased the locomotive in 2004 and restored it to operating condition in 2007. Because of its small size, it can be trucked anywhere in the country to operate on any railroad. During your ride you will witness the natural beauty of the Catskills as you travel along in vintage coaches. After debarking, we travel to our full-service, overnight accommodations located just minutes from the station. There will be time to settle in and relax before an included dinner is served at a locally owned restaurant just minutes from the hotel. Winner of many Mid-Hudson Valley Choice Awards, this eatery recently celebrated 25 years in business. The décor is absolutely beautiful and the food……delizioso!

Say goodbye to the historic Hudson Valley after breakfast at the hotel. We will board the coach and travel west to Honesdale, PA, home to the first commercial steam locomotive run on rails in the United States, the Stourbridge Lion. On August 8, 1829, the Stourbridge Lion started in Honesdale, ran three miles to Seelyville, and returned; Honesdale, therefore, is known as the birthplace of the American Railroad. Our first stop upon arrival is at the Wayne County Historical Society Museum. This museum contains a full-scale replica of the Stourbridge Lion. It also displays many historical photographs, artifacts and other exhibits. During your self-guided tour, there will be time to visit the permanent exhibits such as Movin' Energy, Wayne's Glass and Faces in Clay that interprets the Native American history of the upper Delaware Valley. We depart the Museum and walk down the street to the Stourbridge Railroad Company. The railroad traces its beginnings to the Delaware & Hudson Canal transporting barges of coal up from Pennsylvania and destined for the Hudson River and eventually the ports of New York City. A gravity railroad was built to carry coal over the mountains from Carbondale to Honesdale in 1829. Coal would be transferred from train to canal boat at Honesdale. Seeking to haul greater amounts, the idea of steam-powered locomotion was proposed. The leaders in steam technology at the time were in Great Britain, and so three engines were ordered and delivered to America. According to the Wayne County Chamber of Commerce, this is the site of "the first commercial locomotive on rails in the western hemisphere!" Your "ticket to ride" includes a hearty, mobile lunch. During our 45 minute train ride through the Northern Poconos, the engineer will share tales of the region's rich history as you gaze out at the beautiful countryside along the Lackawaxen River Gorge. When the train arrives at the Hawley station, we will board the coach and begin our travels back to Pennsburg. Arrival home is scheduled for early evening.

Perkiomen Tours recommends that you consider purchasing Travel Insurance for your tour. Travel Insurance is purchased directly by you from a third-party of your choice. One option is Travel Safe Insurance. You can purchase insurance directly from Travel Safe through our website. www.perkiomentours.com