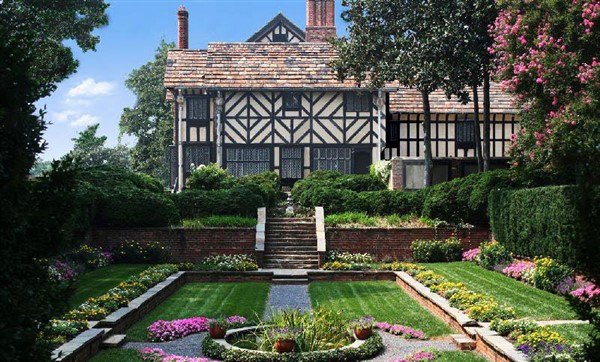 This unique tour of beautiful gardens and plantations is the perfect way to welcome in the spring season.

As you step through the gates of these historic plantations you may feel as though you have traveled back in time – a time when stately manor houses and spectacular gardens dotted Virginia’s countryside.

This morning we depart for Fredericksburg, VA. After lunch on your own in Downtown Fredericksburg, we will visit Kenmore Plantation & Gardens. This Georgian-style mansion was the home of George Washington's sister Betty and her husband. It is famous for its plastered ceilings, some of the finest surviving examples from America's colonial period. The gardens are based on a popular Colonial design, a foursquare edged in boxwoods. A short Wilderness Walk features native Virginia plants. We will also visit the Mary Washington House, home to George Washington's mother, Mary Ball Washington. After dinner at The Alpine Chef, an outstanding German Restaurant located in Fredericksburg's historic train station, we will check-in to our Ashland hotel.

Today, an informative tour of Virginia's first plantation, Shirley Plantation, showcases the lifestyles of Virginia's Gentry Class. Martha Washington, Martha Jefferson and Letitia Tyler, three future first ladies, grew up nearby as part of this elite class and experienced a lifestyle very similar to the ladies of Shirley. Next, we will visit Berkeley Plantation. The 1726 Georgian mansion is the birthplace of Benjamin Harrison V, signer of the Declaration of Independence, and William Henry Harrison, ninth president of the United States. During the Civil War the plantation was occupied by Union troops and the famous bugle call 'Taps' was written here. The house is furnished with 18th century pieces and the gardens are comprised of five terraces of boxwoods and flowering gardens. After lunch we depart for Richmond, Virginia. In the 1700s a canal system was envisioned that reached from the fall line at Richmond all the way inland to the Ohio River. George Washington surveyed and laid out much of the Virginia portion of that canal. We will ride on a modern-day canal boat and follow the course of that historic waterway in Richmond. We will then enjoy dinner and a show at Hanover Tavern Dinner Theater. Since 1733 a tavern on this site has fed and entertained visitors, among which are Patrick Henry, George Washington, Lord Cornwallis and the Marquis de Lafayette. Tonight, we'll dine in the 18th-century tavern and then be treated to a performance by the Virginia Repertory Theater.

Today, after breakfast, we will visit Agecroft Hall, a centuries-old English manor home purchased and moved across the Atlantic to Richmond. A guided tour of the home reveals the lives of the landed gentry of Tudor England. The expansive gardens were designed by Charles Gillette and include a fragrance garden of blooming aromatics, a sunken garden full of annuals and knot garden of clipped herbs. We will then visit the Virginia Museum of Fine Art - Faberge Egg exhibit. Here we will get an up-close look at these egg-cellent pieces! Last on today's itinerary is Maymont House & Gardens. The fabulous Maymont Estate was left to the city of Richmond by its owners in 1925. We'll get a tour of the Gilded Age mansion followed by a special guided tour of the gardens led by Maymont's horticulturalist. The gardens date to the early 1900s and include a spectacular Japanese garden, an Italian garden and an arboretum. They are among the finest such gardens on the East Coast. After dinner at a local restaurant, we will return to our hotel.

This morning, after breakfast, we will visit Lewis Ginter Botanical Gardens, named one of the 'Best North American Gardens Worth Traveling For' by BBC Travel and one of the 'Best Botanical Gardens in the US' by the Travel Channel. There's lots to see, including more than a dozen gardens. Enjoy this beautiful facility at your own pace and don't forget to shop in the lovely Garden Store. This afternoon we will visit Belmont: Gari Melchers' Home, Studio & Gardens. Gari Melchers was one of the most successful painters of his time, sought out by the rich and famous. She was a beautiful young art student - and his biggest fan. They fell in love on an ocean liner and spent their lives sharing their love for art and each other. More than 100 years later, the story of Gari and Corinne Melchers lives on in their 18th century home, Belmont. The gardens are of Georgian design, noted for symmetry and geometry. Boxwoods are everywhere. With a mid-afternoon departure, and a stop for dinner en route home, our arrival home is scheduled for later this evening.